Travels with a Mini-Book

Book artist and illustrator Amy Strike is running a book arts project called The Invasion of the Miniature Books and has a collection of miniature books ready to swarm across the earth . . . one of them hitched a ride with us on our trip out East.

On our first day out, and here is ms mini-book admiring Mireuk Daebul at Bongeunsa Temple. 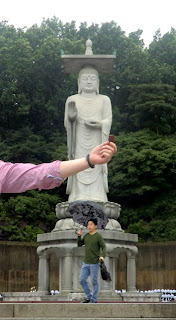 Stones and cairns are a particular fascination of mine, and (so it would seem) ms mini-book too . . . 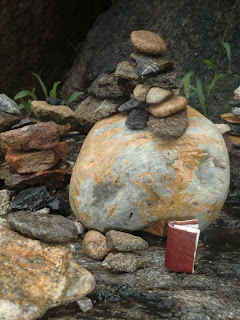 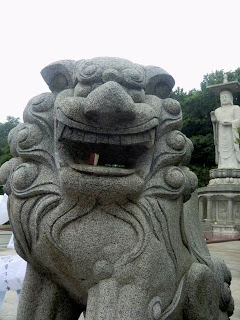 After braving the Lion's mouth some refreshment is needed. 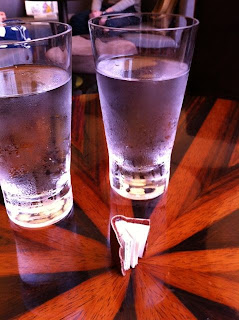 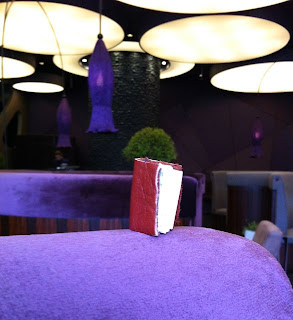 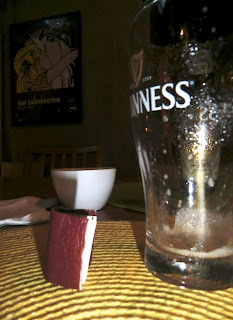 Ms mini-book on top of the world! 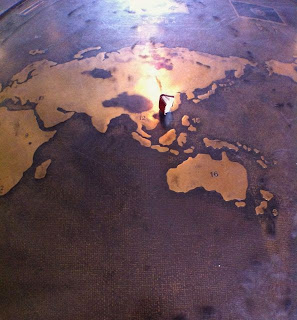 Ms mini-book aimlessly wandering (that's what airports do to you) in the glorified shopping centre that is Seoul airport. 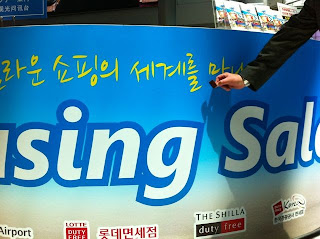 Admiring the view in Shanghai (one hot city) from the vantage point of an air conditioned room. 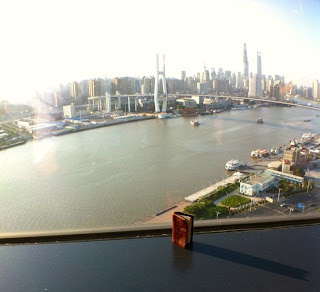 Ms mini-book would like to see more of world, and she so decides to return with us to the UK in the hope of further travels . . . 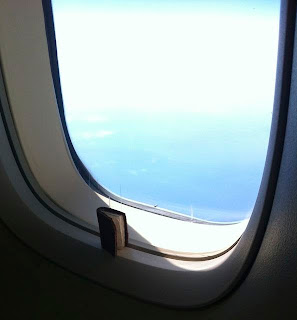 e-mini-book thought that was a great idea so tagged along too. 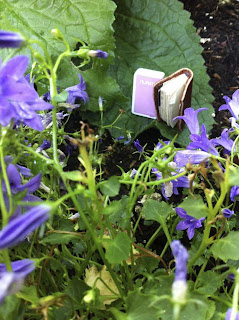 Posted by Mavina Baker @ Teacup Press at 17:28 No comments: Links to this post

Shanghai is an impressive city.

Everything about it is BIG . . More than 23 million people live there . . Gazillions of skyscrapers . . The speedy Maglev at 430km/h . . The feel of atmospheric pollution on my eyeballs . . . Bright lights . . . Dazzling electronic incarnation of an old city.

Even so, I cannot access my own blog (or ones that I follow) nor Twitter, Wikipedia, Facebook in fact any social media. And it's really odd but without access to blogging and twitter it feels as if I've been silenced, cut off from the world . . . that is obviously untrue, I've not been cut off from the world - just a part of it.

A bit of the world which I take for granted. Now I no longer think of Twitting as a bit of puerile fun, but, as a kind of freedom . . .

Back home again and it's no longer an illegal attempt, so blogging like a mad thing.

As good tourists we started our visit with a saunter along The Bund. Old Shanghai's commercial heart and named after the Anglo-Indian term for the embankment of a muddy foreshore. No mud to be seen, just fantastic looking buildings. 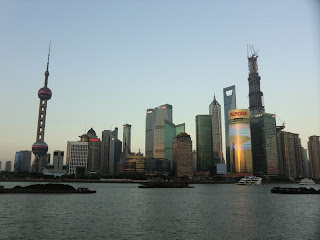 A quartet of twenty somethings approached us and asked us to take photos of them - and then did the same for us. And (not for the first time when travelling) I felt so lucky that the English language has become the lingua franca for much of the world, because that meant even though I was on the other side of the planet I could still have a conversation with people.

Their english was faultless . . . my chinese extended to thank you! 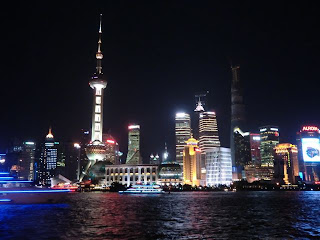 Next morning and off to the Shanghai Museum in People's Square. After a good 30 minutes queuing in the hot sun and then running the gauntlet of airport style security (with the oh so familiar look on the faces of the security personnel) we where in, with what felt like most of Shanghai. Lots of children being chivvied along by grandparents, parents . . . us . . . and other visitors looking at brochures and deciding what to see first.

One of the highlights is its gallery of bronzes, most pieces of some considerable age. 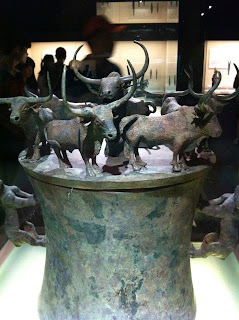 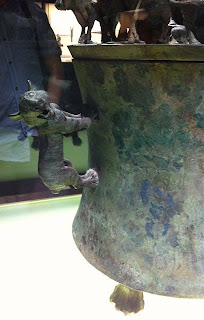 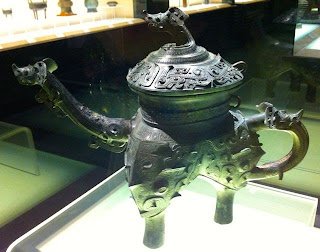 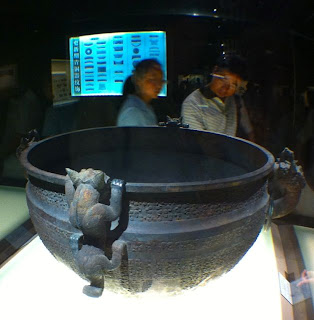 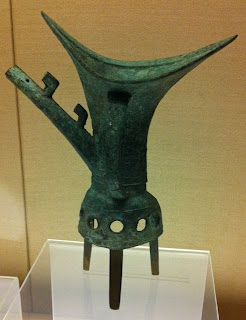 Painted and lacquered masks from Tibet. 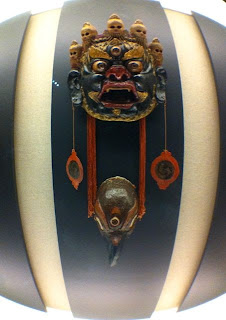 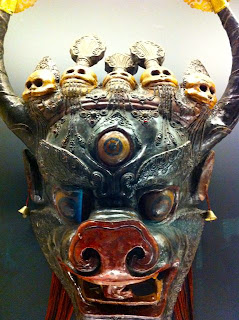 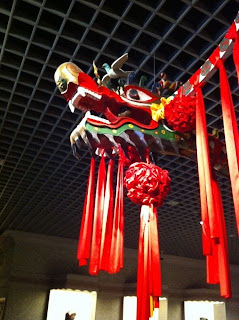 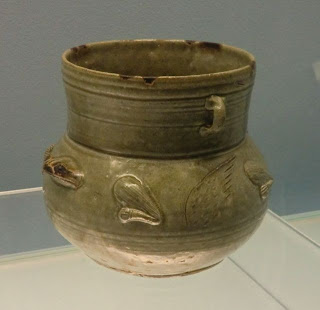 A fabulous little glazed pottery figurine of a lady with long sleeves.

One of my favourites, a painted female figure with a face so real I felt sure that this was a woman, known and loved, from history. 618-907 A.D. 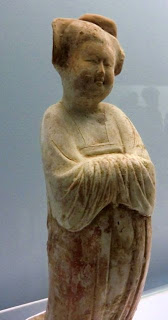 This wooden head of Kasyapa (an ancient sage) is so sensitively carved that the humanity shines out, and this photograph doesn't even get close to showing it. 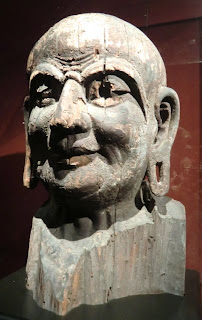 Rather cute (don't you think?) a stone Kasyapa. 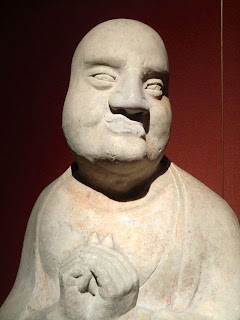 Another favourite, a little painted wooden figure from the time of the Warring States, 475 - 221 B.C. Beautiful in its simplicity.

Just 'round the corner, in the Museum of Contemporary Art there was a happening, as part of Revel, to celebrate eight years in Shanghai.

I particularly enjoyed the preface.
'Everyone revels in their own way. Some revelling has changed the course of history, while most others are merely acts of self-indulgence. The Tang Dynasty poet Li Bai revelled in drunken binges that helped produce lyrics that have delighted generations since. The counter-culture movement of the 1960's in Europe and America revelled in alternative lifestyles that have shaped global culture today. At one point or other each of us has revelled in our own miseries and fantasies. At this moment we have seized the occasion of Shanghai MoCA's 8th year anniversary to revel in the recent history of this city's burgeoning visual culture scene'. 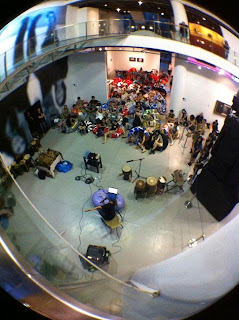 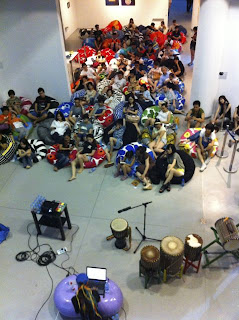 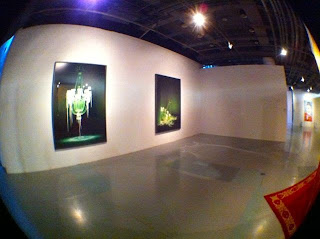 Posted by Mavina Baker @ Teacup Press at 13:40 No comments: Links to this post

No matter how interesting and exotic a travel destination is, it's always great to return home... you know, unpacking . . . sorting the laundry . . . finding something unidentifiable in the fridge . . . And checking out the post . . . An intriguing large brown envelope? . .

How superb is this! Ta-dah Bookmarks part XI

The gift of an eclectic selection of mini art works. www.bookarts.uwe.ac.uk for more information.

- Posted using BlogPress from my iPad

Posted by Mavina Baker @ Teacup Press at 08:52 No comments: Links to this post

In my short time in Seoul I feel I'm getting to know the metro quite well. It's so easy, all stations are marked in English as well as Korean and they're numbered - how brilliant!

And gentlemen of a certain age reacquaint themselves with English by chatting to me. (I don't think I look like a damsel in distress) but they start conversation by asking me if I know where I'm going and that leads on to them telling me about their time working in either the UK or the USA . . .

One, a geologist in (I'm guessing) his eighties, insisted that we follow his lead and promptly got us lost. But he was so charming it would have been impossible to be annoyed.

However, I've been trying to fit in as much as possible so cramming in markets, museums and palaces.

We found the most intriguing herb medicine market, Gyeongdong Market, (well worth a look if you're visiting this city) Korea's biggest Asian medicine market which runs over several blocks.

I recognised some of the herbs and bark, but it took me a little while to identify the frogs!

For a sprawling round the clock market go to Namdaemun market, especially if you like stationary. I was so mesmerised I only remembered to take one photo, mind you I'll be carrying plenty of paper through hand baggage on the way home!!

Our guide book said "only time to visit one gallery? Then make it the Leeum Samsung Museum of Art". A pretty good choice . . . and I can recommend the cafe.

Mr B waits as I get the camera out - Again.

Changing the Gay Guard at Gyeongbokgung Palace. As luck would have it we arrived just as these fabulous chaps where strutting their stuff . . . Peacock feathers and all!

Posted using BlogPress from my iPad

Posted by Mavina Baker @ Teacup Press at 15:54 No comments: Links to this post

Swanning Off to Seoul and Shanghai

Mr B had to go to Seoul (and Shanghai) on a business trip, so I took the opportunity to tag along on his coattails for a visit!

Glad I did. Seoul is a great city to visit, even in the hot n humid rainy season. We're staying in the Gangnam district (a very stylish area) most of it developed since the '88 Olympics and hit the ground running with a visit to Bongeun-sa, a Buddhist temple, almost straight off the plane.

Our arrival coinciding with the striking of drums and bells in the Bell Pavilion. There are four instruments in the pavilion, a Dharma bell, a Dharma drum, a cloud shaped gong and a wooden fish!
These four instruments are struck at two services, dawn and dusk, with the intention to save all the beings in the universe. The sound of the bell saves the dead spirits in hell, the drum save the animals, the cloud shaped gong the spirits in the air and the sound of the wooden fish saves creatures in the water . . . you can make out the drum in this photo.

The Bell. It makes the most impressive sound, entering via the solar plexus and making the hair on the back of your neck stand on end.

At the gate of truth, protected by four fierce guardians.

I have with me a mini book. Not one of mine, but one of Amy Strike's collection of miniature books which are currently invading the globe.

Mini book bravely going where no mini book has gone before!

(Apologies for the quality of the photos... haven't got a good excuse... Low light levels... I was quite tired, I hadn't slept on the flight..... )
- Posted using BlogPress from my iPad


Location:Samseongdong,,South Korea
Posted by Mavina Baker @ Teacup Press at 04:39 No comments: Links to this post