In Praise of Beautiful Books

A short review of, In Praise of Beautiful Books, published by BCF Books 2013
Posted by Mavina Baker @ Teacup Press at 14:50 No comments: Links to this post

On a recent visit to Cheltenham and with an hour to spare, I dropped into The Wilson the sparkly new Art Gallery and Museum to check out the fabulous new gallery space, and to see a truly inspiring exhibition by glass artist Colin Reid.

If you're at all interested in glass in any of its forms, and want to be astounded, don't miss this show. A fine retrospective of work from over 30years. 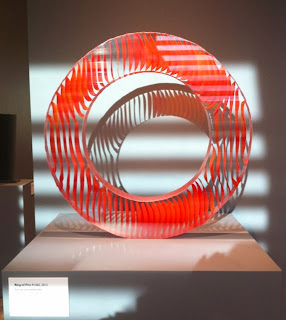 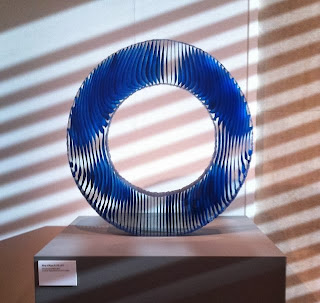 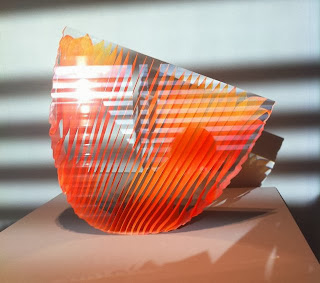 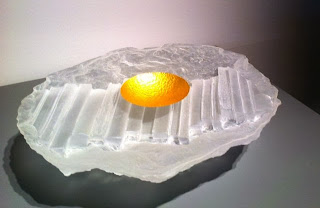 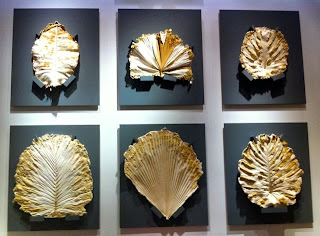 Casting Brilliance: Glass by Colin Reid is currently on show at the Cheltenham Art Gallery and Museum. Until 5th January 2014 and open daily from 9.30am until 5.15pm
Posted by Mavina Baker @ Teacup Press at 17:23 No comments: Links to this post

Newlyn School of Art - and a full weekend in lovely Cornwall

Having booked myself onto a workshop at the Newlyn School of Art I persuaded Mr B to come to Cornwall with me for the weekend and then while I was painting he could spend a couple of days working from there.

The Old Coastguard in Mousehole came recommended, for which I'm so glad. With lovely helpful and smiley staff, a great atmosphere, good food and views of the sea from our room - what more could we want!

We intended to include a bit of walking so Sunday morning found us heading off along the coastal path, wet weather gear tucked into a rucksack . . . along with my trusty fish-eye lens.

The harbour in Mousehole was like an Alfred Wallis painting come to life, 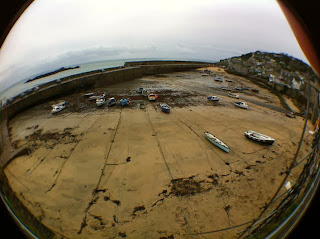 and again, looking back and seeing the harbour wall wrapped around the land . . . another painting? 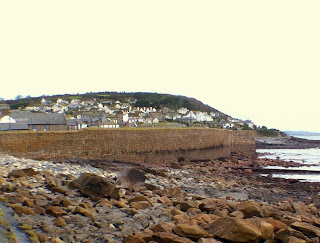 Although a blustery day with the ever present threat of rain, it was still mild and these little violets scattered along the path show how clement the weather can be down this neck of the woods. 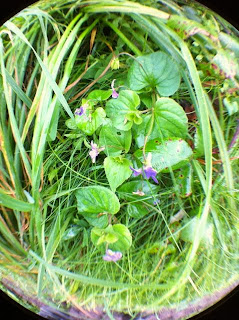 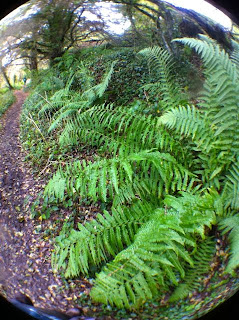 Following the footpath through densely wooded areas we found little gaps in the undergrowth (like small illustrations) which allowed us glimpses of the rocks below. 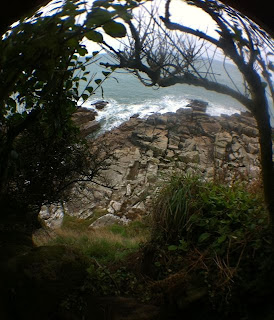 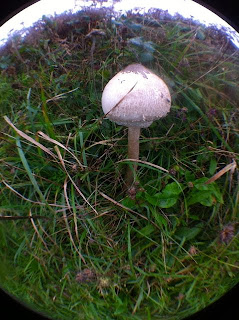 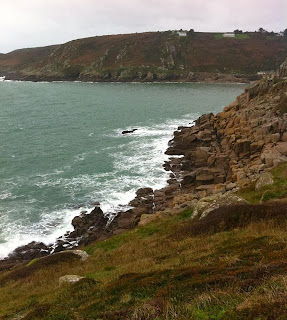 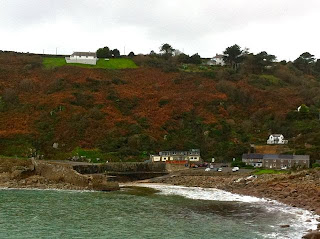 we arrive at the Lamorna cove cafe just as the rain starts to come down so decide to stay a while! 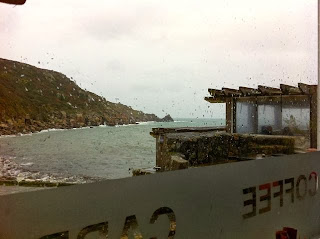 Eventually we accept that the rain has settled in and we head back to Mousehole. 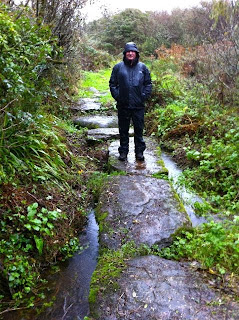 Monday morning dawned bright and sunny (dam) and I spent all day inside an old school building working at, Still Life: Essence of Form a painting workshop with tutor Jessica Cooper. 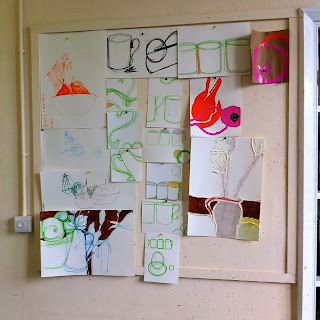 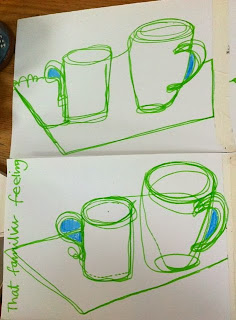 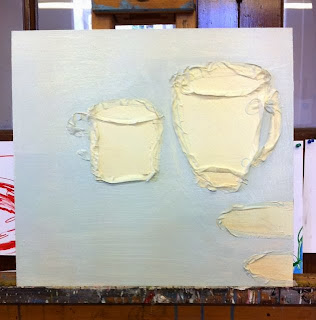 and playing with colour proportion and the effect that has on the 'feel' of the work. 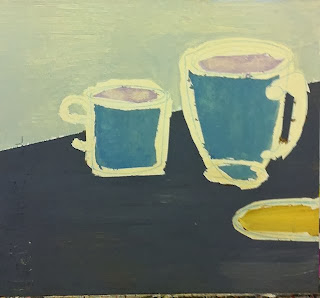 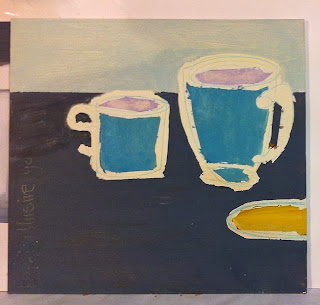 Returning home I found that the germ of an idea had taken root. It dawned on me that I could use the cup image as a metaphor for sibling (or family) relationships. 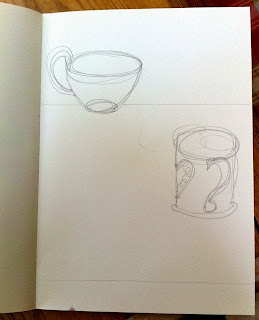 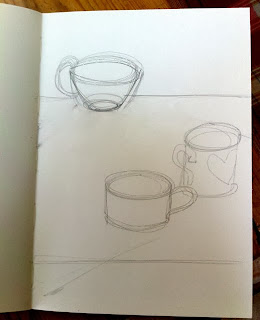 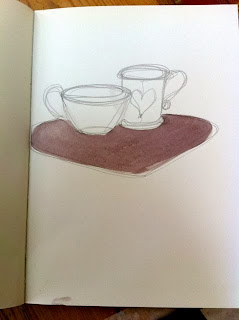 This is heading in the direction of a book, concertina and probably quite large scale. 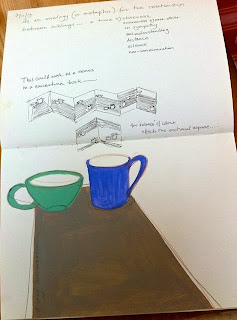 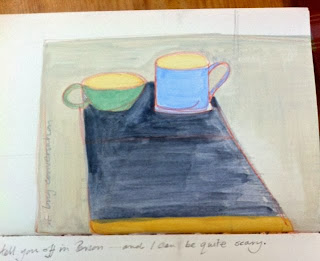 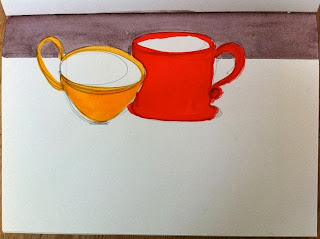 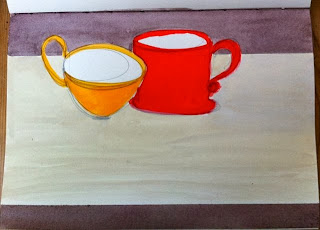 and finally, time to take one of these cups and put some coffee in it . . . 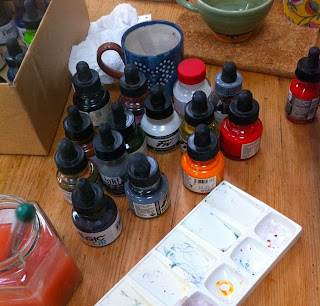